A starter is a device which helps in smooth starting and running of a dc motor(mostly dc shunt, compound motors).More technically, an electrical arrangement which limits the starting current supplied to the motor.
Before going to see the working of a 3 point starter let’s see why we need a 3 point starter?
We know that in a dc motor to get back emf the armature has to rotate in a magnetic field, due to generator action in the armature core back emf is produced. This back emf opposes the supply voltage which helps in governing the motor. But initially, armature doesn’t rotate so back emf will be zero so high amount of current will be drawn.Which can damage the motor as we know the resistance of armature is low.So by using a 3 point starter, we can start dc shunt or dc compound motor without damage.
Let,
E=Supply voltage
Eb=Back emf
Ia=Armature current
Ra= Armature resistance
In running conditions of dc motor
Ia=(V-Eb)/Ra
but initially Eb=0 then Ia=V/Ra
So Ia value will be several times higher than rated current as Ra value is small.
To limit the high initial current we use this 3 point starter.

It’s well known that a resistor will limit current flow. Exactly what we are using in this is series of resistors which are divided into sections. Here other parts like no volt coil, overload release are the other two main parts which come into picture during the operation of a 3 point starter. 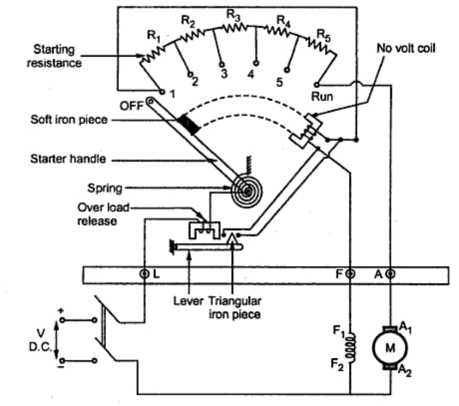 In the above diagram of three-point starter, you can see 3 points.They are,
L- Line terminal and it is connected to the positive terminal of the supply.
F- Connected to the field winding of the motor.
A- Connected to the armature of the motor.
Here we can clearly see that this L point is further connected to overload release which is nothing but an electromagnet. This other end of overload release is attached to the starter handle which is fixed at one end and at the other end it is free to move and it moves against the force of spring. You can see the other connection from stud 1 to the no volt coil. And the other end of this NVC (no volt coil) is connected to point F. Now the last stud is connected in series with armature as shown figure of three-point starter.

Switch on the supply first. Initially, the handle will not be in contact with the resistance. Now after switching on the supply move this handle to stud 1 manually. Now field gets supply through the NVC (no volt coil) as this movement of a handle on to the stud 1 will form a closed path. As mentioned earlier armature is in series with the resistance the current through armature will decrease. Now slowly move this handle over the studs  2,3,4 so resistance will be cut down slowly. We need to cut the resistance after the initial operation because after the rotation of armature back emf will be produced so there will not be any necessity for this resistance. The handle will be always maintained in run position during operation.

To know this we should know what does a no volt coil do. While supply is on the field is supplied through NVC. NVC is also an electromagnet it magnetizes when handle comes into contact with stud 1. To this handle, a soft iron piece is attached when all the resistances are cut off this handle is attracted to NVC due to soft iron and remains in this position against the spring force during working condition. In three-point starter whenever there is the failure in supply or damage in the field winding this NVC demagnetizes and handle comes to its initial position due to the spring force. As the resistances are in series with armature the high current passage will not be there and the motor is protected if we try to start the motor during any damage.

Motor gets its supply through OLR. This is also an electromagnet which magnetizes when supply is on. Under this, there is an arm and its fixed to the fulcrum.In the 3 point starter under overload, it magnetizes and attracts the arm due to this arm moves upwards. There is a triangle shaped piece which gets attached to the two ends of NVC when the arm is attracted upwards which shorts the NVC. So now voltage across NVC is zero and hence NVC demagnetizes so handle comes to an original position in this way the motor is protected automatically. During normal condition, the force of attraction gets balanced with gravitational force( that is till full load current is reached). So NVC and OLR act as protecting devices.

Here the NVC and field are in series.  To get more than rated speed for a motor we need to add extra resistances which makes current through NVC less and there is a chance that NVC doesn’t magnetize appropriately and thus soft iron piece doesn’t attract as a result handle will move to initial position thus stopping the motor.
To avoid this we use 4 point starter because in this NVC and field are connected in parallel.In the next article, we discuss about advantages & disadvantages of Three point starter, Four pointer starter.