In the previous post we have seen how does a 3 point starter works. There is only one difference in construction between  3 point starter and four-point starter. Here the no volt coil and field are not connected in series as in 3 point starter but the NVC is connected to the supply independently through a point called N which can be seen clearly in the below figure. 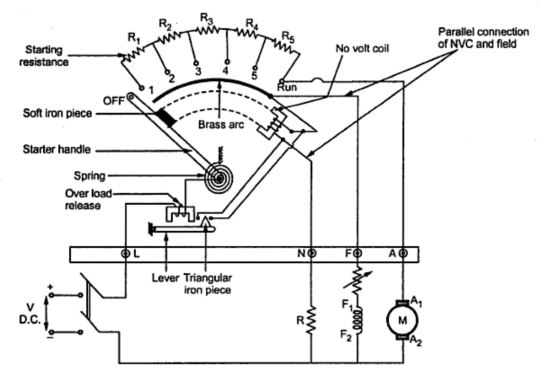 In 4 point starter NVC gets supply directly from the mains it doesn’t depend on the field which can be seen clearly from the diagram. So this NVC will produce the force which helps to keep the handle in RUN position all the time and also the current through NVC can be adjusted through R(series with NVC).
What is the disadvantage of this?
As  NVC is independent of field NVC will be in RUN position all the time. Now if the field gets opened while the motor is in running condition due to the presence of residual flux motor rotates with dangerously high speed (since N is proportional to 1/ᴓ) this happens because still the handle will be in the run position only. But in 3 point starter as soon as the field fails handle comes to off position so motor stops. But in 4 point starter as this is not the case the handle will remain in RUN condition all the time it is not suitable to protect the motor from high speeds.
Overload release is similar as in the 3 point starter. When the current increases more than full load current the OLR which is an electromagnet pulls the arm upwards and the triangular piece shorts the two ends of NVC and it demagnetizes the NVC and motor shuts down automatically. But till the full load current, the force of attraction gets balanced with the gravitational force.