The relationship between Voltage, Current and Resistance in any DC electrical circuit was firstly discovered by the German physicist Georg Ohm.

By knowing any two values of the Voltage, Current or Resistance quantities we can use Ohm’s Law to find the third missing value. Ohm’s Law is used extensively in electronics formulas and calculations so it is “very important to understand and accurately remember these formulas”.

It is sometimes easier to remember this Ohm’s law relationship by using pictures. Here the three quantities of V, I and R have been superimposed into a triangle (affectionately called the Ohm’s Law Triangle) giving voltage at the top with current and resistance below. This arrangement represents the actual position of each quantity within the Ohm’s law formulas.

Transposing the standard Ohm’s Law equation above will give us the following combinations of the same equation:

Then by using Ohm’s Law we can see that a voltage of 1V applied to a resistor of 1Ω will cause a current of 1A to flow and the greater the resistance value, the less current that will flow for a given applied voltage. Any Electrical device or component that obeys “Ohm’s Law” that is, the current flowing through it is proportional to the voltage across it ( I α V ), such as resistors or cables, are said to be “Ohmic” in nature, and devices that do not, such as transistors or diodes, are said to be “Non-ohmic” devices.

Electrical Power, ( P ) in a circuit is the rate at which energy is absorbed or produced within a circuit. A source of energy such as a voltage will produce or deliver power while the connected load absorbs it. Light bulbs and heaters, for example, absorb electrical power and convert it into either heat, or light, or both. The higher their value or rating in watts the more electrical power they are likely to consume.

The quantity symbol for power is P and is the product of voltage multiplied by the current with the unit of measurement is the Watt ( W ). Prefixes are used to denote the various multiples or sub-multiples of a watt, such as milliwatts (mW = 10-3W) or kilowatts (kW = 103W).

Then by using Ohm’s law and substituting for the values of V, I and R the formula for electrical power can be found at:

To find the Power (P)

Again, the three quantities have been superimposed into a triangle this time called a Power Triangle with power at the top and current and voltage at the bottom. Again, this arrangement represents the actual position of each quantity within the Ohm’s law power formulas.

and again, transposing the basic Ohm’s Law equation above for power gives us the following combinations of the same equation to find the various individual quantities:

So we can see that there are three possible formulas for calculating electrical power in a circuit. If the calculated power is positive, (+P) in value for any formula the component absorbs the power, that is it is consuming or using power. But if the calculated power is negative, (–P) in value the component produces or generates power, in other words, it is a source of electrical power such as batteries and generators.

Electrical components are given a “power rating” in watts that indicate the maximum rate at which the component converts the electrical power into other forms of energy such as heat, light or motion. For example, a 1/4W resistor, a 100W light bulb etc.

Also, we now know that the unit of power is the WATT, but some electrical devices such as electric motors have a power rating in the old measurement of “Horsepower” or hp. The relationship between horsepower and watts is given as 1hp = 746W. So for example, a two-horsepower motor has a rating of 1492W, (2 x 746) or 1.5kW.

To help us understand the relationship between the various values a little further, we can take all of the Ohm’s Law equations from above for finding Voltage, Current, Resistance and of course Power and condense them into a simple Ohm’s Law pie chart for use in AC and DC circuits and calculations as shown. 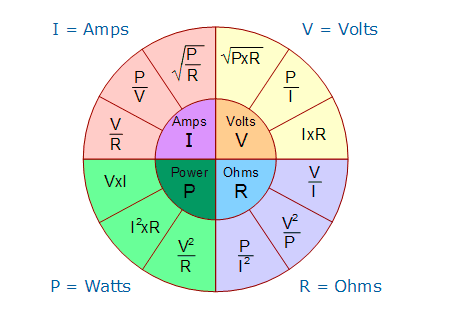 As well as using the Ohm’s Law Pie Chart shown above, we can also put the individual Ohm’s Law equations into a simple matrix table as shown for easy reference when calculating an unknown value.

For the circuit shown below find the Voltage (V), the Current (I), the Resistance (R) and the Power (P).

or to find the various individual quantities:

If the electrical power consumed (or generated) is measured in watts or kilowatts (thousands of watts) and the time is measured in hours not seconds, then the unit of electrical energy will be the kilowatt-hours,(kWhr). Then our 100 watts light bulb above will consume 2,400-watt-hours or 2.4kWhr, which is much easier to understand the 8,640,000 joules.

1 kWh is the amount of electricity used by a device rated at 1000 watts in one hour and is commonly called a “Unit of Electricity”. This is what is measured by the utility meter and is what we as consumers purchase from our electricity suppliers when we receive our bills.

Now that we know what is the relationship between voltage, current, and resistance in a circuit, in the next tutorial relating to DC Circuits, we will look at the Standard Electrical Units used in electrical and electronic engineering to enable us to calculate these values and see that each value can be represented by either multiples or sub-multiples of the standard unit.