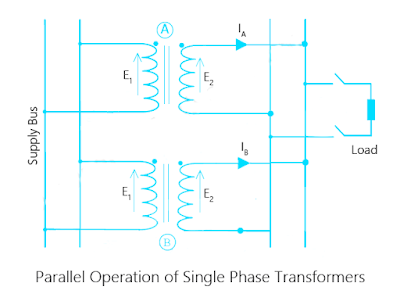 Advantages of Parallel Operation of Transformers

Parallel operation is nothing but connecting primary windings of two or more transformers to supply and secondary windings to common loads.To supply more than the rating of existing transformer parallel connections will be employed.It is very economical to operate small no.of transformer units in parallel to supply rated output than a big rated transformer.

Parallel operation of transformer because of following advantages

Conditions for Parallel Operation of Transformers

The voltage ratios of two transformers must be same but why?
The reason is simple if voltage ratio of two transformers is different and they put in parallel with same primary supply voltage, there will be a difference in secondary voltages. As secondaries of transformers complete a closed loop there will be circulating currents.In this case, the considerable amount of current is drawn by the transformers even without load.As the internal impedance of the transformer is small, a small voltage difference may cause sufficiently high circulating current causing unnecessary extra I²R loss. 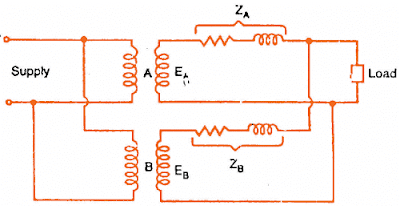 Connections with regard to Polarity

The phase sequence must be identical for all parallel transformers.

This condition is can be applied only to poly-phase transformers. If the phase sequences are not same, then transformers cannot be connected in parallel.During the cycle, each pair of phases will be short-circuited.